AT Trail Angel Len Morawski, our Volunteer of the Month

While still fairly new to AMC, Len Morawski made quite a name for himself having been the top Delaware Valley Chapter mile hiker in both 2016 and 2017, walking more than 2200 miles with the club in 2017. At times, Len would go on both morning and evening hikes. Not one to embrace technology, prior to departing, Len would coordinate with others for the next upcoming hike.

In 2018, Len began a quest to section hike the Appalachian Trail. While COVID-19 sidelined many from pursuing this endeavor, Len was there to support those who persevered.

Len has made a great impression not only in our Delaware Valley Chapter, but also up and down the AT, bringing supplies and trail magic to many. A gracious communication from an uplifted AT trekker from Albuquerque was the impetus for this nomination.

After speaking to several others, it seems this nomination is well-deserved.

Len had been described as kind, a caring gentle soul. Generous and humble, willing to go the extra mile, or several hundred, as our AT trekker indicated. “Turtle 77” was known as far north as New Hampshire and Maine.

Providing support for one of our own DV members, Len not only carried their supplies through Vermont, but every day would lay out trail magic at various trail entries. When they came to a bridge crossing and spotted a bag of apples and bananas hanging from the railing, they knew that Len had been there. Len would bring fruit, ice, protein bars and water, as well as provide transportation for resupply to other hikers.

Len is also known to be a rather stealthy, super trail angel. Imagine a long day of hiking the AT, it’s May and the trail is heavy with thru-hikers. You’ve finished dinner and look up, and there like a mirage is Len, coming into camp with coolers, with not only pints of ice cream for you and your hiking partner, but additional ice cream for the thru-hikers. Still frozen ice cream! With just a rough itinerary and a bit of magic, Len anticipated where the pair would be, found a roadside crossing and provided the ultimate surprise!

Having left Vermont, our AT trekker thought he would not see Len again. However, later in their journey when they reached the area near  Katahdin, ME, Len drove from his home in the Delaware Valley to help with supply in the 100 Mile Wilderness.

Len’s generous spirit has touched many on the trail. Despite costs associated with supporting others on the trail, Len continues to give graciously and without accepting financial contributions.

Our Volunteer of the Month program was initiated to recognize volunteers nominated by their peers. Chapter members can nominate volunteers by email to recognition@amcdv.org. The nomination should contain the nominee’s name, reason for the recognition and name of the nominator. The monthly winners are entered into a drawing at the Annual Dinner and Meeting for a grand prize. Nominees must be an AMC member, not an elected member of the current Executive Committee, and may serve in any volunteer capacity that benefits the Chapter mission in the Delaware Valley area. See the past Volunteers of the Month.

Larry Priori, Appie of the Year

Larry Priori, our Appie of the Year, is a popular hike leader, known for his welcoming and relaxed style. To offer support, he will often tell a first time hiker his story about starting to hike seriously later in life, building up to a high level of fitness. He often led hikes several times a week before the COVID shut down and has been one of our first leaders offering regular hikes following the July restart.

But don’t let that calm attitude fool you, because Larry has done extensive preparation and education to be ready for almost any adverse event that can take place in the outdoors. In fact, his motto regarding Wilderness First Aid skills is “not if, but when.” He includes as first aid mini-talk into most of his hikes to raise awareness of the importance of being prepared. And being a true trailblazer, during the activity pause he agreed to offer on line First Aid reviews to keep members skills sharp.  His first aid kit is amazing.

Larry has also helped the chapter by being a member of our  Nominating Committee for the past two years.

Joe Nanfara, our Golden Appie of the Year, has a quiet sense of humor and a sincere love of introducing people to the outdoors that is apparent from the moment you meet him. He is also a popular hike leader who makes new participants feel welcome and accepted immediately.  Often when new members talk about how they came to be part of AMC, one of the weekly hikes our Golden Appie led is mentioned.

Joe has also served the Chapter by being part of the Chapter Executive Committee for four years managing Chapter finances. And if that wasn’t enough, he volunteered and is doing the same management of finances for our Fall Gathering 2020 Committee.

Joe is one of the biggest cheerleaders for the Delaware Valley Chapter and approaches decisions with fairness and kindness.

COVID Heroes: Those serving others during the pandemic

Our chapter members have heart! DV AMC is proud of those who have served as essential, front line workers throughout this crisis. To those who put themselves in harm's way to care for our neighbors and support our communities through work and volunteer efforts, thank you!

We asked chapter members to send nominations for people who have been doing extraordinary things to help their community, help the environment, or help AMC during the COVID pause. As you can see from the list below, many of our members have been busy doing just that in a wide variety of ways. 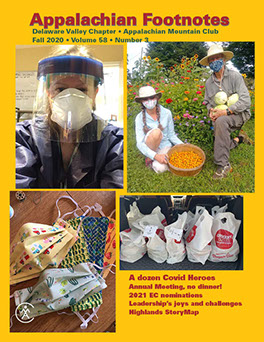 Read about all our COVID Heroes in the